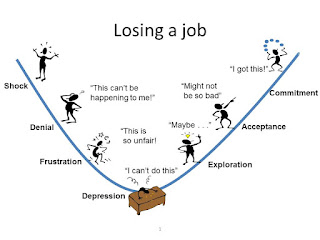 Have you ever been fired from a management position?  If the answer is YES, then you know exactly what the above diagram is all about.  Well, I was fired once and I went through all these seven stages starting with shock . . . (as mentioned in the diagram) for a while and, at the initial stages, all by myself, as there was no one’s shoulder available here at home to lean on as my Late* loving/caring Swiss wife Charlotte/Nargis and two lovely children Rabia & Shahid were vacationing in Switzerland.  I certainly didn’t want to tell them to avoid getting them upset over there. Here then, I just want to share my lonely ordeal with those who care.   * Prayer: Inna Lillahe wa Inna Illahe Rajeoon.  To Allah we belong and to Him we shall return.

In the year 1985, I was working at a multi-billion-$ corporation’s head offices in in my fourth year with this company.  During this period, I, as a Systems Manager reporting to the VP-IT department, did some great things for the corporation and its employees from Moncton-NB all the way to Vancouver-BC and every Canadian province in between.

My mandate, when they hired me, was to take this corporation from the 19thc into the 21stc business-technology world.  With the grace of God and with the help of a great, illustrious, and highly experienced team, we did just that within two years and the users of the new and improved business processes and state-of-the art technology were simply “ecstatic”.  My team of business and technical people were praised and were awarded some money and the Award of Excellence more than once.  My boss started to call me his “right-hand man” in those hard, nay tough but hay days at this corporation.  Unfortunately though, this very boss, who I had the utmost respect for, fired me before my fourth year anniversary with this large corporation.  Why?  Let me briefly elaborate.

It was the annual budget time and I came up with the $-budget amount based on the company’s strategic business/technology plan.  “My $-numbers were far too high” as I was told and my boss asked me to lower the number significantly, nay drastically with the assumption that the strategic business requirements will remain in tact.  To cut the story short, I in a very business like manner, refused to do that unless the business plans/requirements change drastically too.  My boss and I then had a heated, very heated argument in his office one very late afternoon with the doors closed.  I told him that I cannot let ourselves do what he wants without lowering the requirements because it’s like jumping out of the 18th floor to commit suicide.  I continued, we may be heroes in the short term, but sooner than later when we go and ask for considerably more money, the top management will fire both of us.

My boss (TN) and I both went home that evening with long faces.  The next morning, I was asked to go to the Human Resources VP’s office for an urgent meeting.  When I got there, I was introduced to a management consultant specializing in handling the fired managers at this trauma’s early or initial stages.  I was told that I have been fired and must leave the premises immediately to be escorted by this consultant.  That certainly was the first such shock, a real shock of my life.

The consultant and I then went to my office to get my brief case only and not the rest of my personal effects for which I had to go back on a weekend to collect.  This very senior consultant insisted with some good reasons or for my safety to drive my car himself and me in the passenger seat.  We went to a restaurant close to my house in the ’s East-end.  He bought some cold drinks for both of us and gently, very gently described the whole procedure of finding me another job as soon as possible through his own company in the downtown-Toronto area.

After an hour or so trying to comfort me, he drove us both to my home and called a taxi to go back to my company where his own car was parked.  Before leaving though, he made sure that I understand the importance of showing-up at his office at 9:00AM the next morning.

When I entered my empty home, I dumped myself on a sofa and cried and a little later dosed off.  When I woke up in the afternoon, I wanted to ‘phone my sweet wife in Switzerland but decided not to bother or worry her and the kids for another two weeks when they did come back and then we all had a crying/ weeping feast together … and, guess what, now I had a caring shoulder to lean on.

Anyway, that very afternoon, I called this company’s President, who I had known for a few years not only at work but we also very often played tennis together with him at Mayfair-East indoor tennis club.  By then, he had already known my sad predicament.  He, as a friend, suggested to me to go and see a good lawyer who I did see the next day. This lawyer managed to get me a very good severance package that included paying this management consulting firm about $10,000 for its services of psychological help and of finding my next job in reasonably a short period of time.

I religiously went to this consulting company 9AM-5PM every day for the next five weeks.  During that timeframe, a psychologist helped me cope with the job losing trauma and one other consultant coached me rigorously with audio/video recording in finding another job. The first job offer, within three weeks, was in Edmonton-AB that my family who had by then returned from unanimously rejected due to the extreme cold weather there.

The next job offer as Business Systems Manager after five weeks was offered at a very large International American Electric company’s Canadian head office at Don Mills, ON, Canada that I had accepted and where I stayed for several years before moving on to Ottawa for a year and then back to Toronto for four years with a national drug mart outfit; after that I went to the Caribbean (2-years) working as a sr. manager IT there, the USA (4-5 years) as Director of large IT-Business projects, and back to Toronto with a food company as Director-IT reporting directly to the CEO.  In 1992, I had also formed my own company VALUE+CARE Marketing Inc. that still exists today for linking people & technology since 1992.

Incidentally, the owner of the Consulting company was a Jewish fellow so was my boss who had fired me.  There was, however, no animosity toward Muslims like me, absolutely not.  They simply were the greatest people I had the honour of meeting in my life.  The consultant/owner, however, did say to me that the Jewish people are working on a big plan so that what had happened (holocaust) in the Hitler Germany will never happen again.  He did not elaborate.

Finally, through the hopvine I heard that six months into the new fiscal year when my former Boss (TN who had fired me) went to the board asking for substantial amount of extra money, he was fired!
Posted by All Solutions Team
Labels: Fired From Job
at 04:58